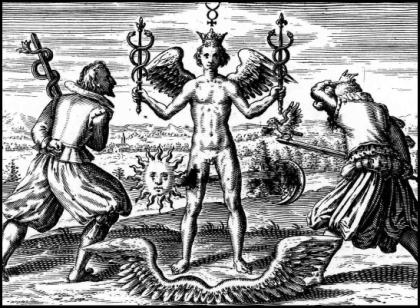 The alchemical Mercury, from Tripus aureus (The Golden Tripod) by Michael Maier, c. 1618.

Demetra George compares the superior conjunction of Mercury to the detriment label of Mercury in Sagittarius as it can be like an insight of genius as well as a mad overflow of information to process- in either case this is because our minds can be full of so much unintegrated information at this stage of Mercury’s cycle that we can be challenged to fully digest the material.  This meaning corresponds to the speed of Mercury at this time, moving as fast as the fleet footed messenger ever moves, as from our perspective with Mercury on the other side of the Sun, it appears that Mercury is flying into the Sun.  Once Mercury gets close to its conjunction with the Sun, however, it takes on a “cazimi” meaning (some consider this to be less than one degree, others less than seventeen minutes) in a moment in time that brings the potential for a re-integration of all the material collected in the mind since Mercury moved direct in its last retrograde cycle on July 1.

If you want to be a pure astrological magician you may take advantage of this exact moment of Mercury merging into the Sun to center within yourself and within connection to the world soul, but in case you miss this moment it is still possible to gain profound insight into not only recent events and mental exploration, but concepts of our identity and self that go back across our entire lifetime.  This is because of the archetypal meaning of the Hermes of the Greeks who is the guardian of souls, a gatekeeper in between states of being who is always present with us during times of a death of an old identity and the birth of a new sense of self.  The astrological aspects for this particular superior conjunction are especially profound in this sense:

In the chart above one can see the intense interactions occurring between planets in Leo and planets in Scorpio, including the close conjunction between the calculation of the mean Black Moon Lilith and the superior conjunction of Mercury in Leo with the Sun, all in square to Saturn in Scorpio. This is a square of manifestation that is an apt symbol of this entire astrological period leading up to the Full Moon in Aquarius. Like the idea of Dane Rudhyar that at the Full Moon we can receive illumination and vision that gives symbolic expression to the fulfillment of our past, the square from Saturn in Scorpio to Mercury’s superior conjunction enforces the necessary limitations and structure upon our perception and experience to cause what has been felt inside to now be seen within our reality and consciousness.  With Black Moon Lilith included in this aspect, it can also mean a feeling of any inauthentic aspects of our recent identity being cut away from us as we integrate the illumination of the superior conjunction.  We can emerge with a purified boldness to radiate like the Leo Sun.  Just as the Full Moon receives the full light of the Sun to illuminate us, so Mercury orbiting close to the Sun at the time of its superior conjunction receives insight to transmit to us.

However, at the time of the superior conjunction the Moon is in Capricorn, square to Uranus in Aries, and conjunct Pluto in Capricorn. This is another deep and hard aspect that while challenging, all together makes it possible to receive real knowledge about our self and our world from the trine between Mercury’s superior conjunction and Uranus in Aries.  A dear friend of mine recently told me that she sometimes hardly notices a trine, and that it can feel more like she is going out for some ice cream; however, when she experiences a square from a power agent like Saturn, it can feel like her entire world and reality is shifting.  This is very true of this moment in time-  Uranus can correlate with shocking insight, Pluto with cathartic confrontation, and so this ongoing square between these heavyweights is completely activated by this Leo superior conjunction of Mercury.  With Saturn further squaring it, there is no escape from the truth. If we are centered in our truth at this time we can express it fully and courageously.

But hold on folks, we cannot forget to mention Mars loving it up in the sign of Scorpio, a zodiac sign giving Mars a full expression of all of his passionate, desirous, and yes, manipulative and maleficent nature.  Mars in Scorpio at this time is in square to Jupiter in Leo as well as in trine to Neptune in Pisces.  Our desires and sense of personal will  as a result can lead us into experiences that reveal disillusionment in one way or another- it will be the hands-on knowledge we gain from our experiences that our desires magnetized that cause this disillusionment.  In combination with Mercury’s superior conjunction that is conjunct Black Moon Lilith and in square to Saturn in Scorpio, this can be an essential stripping away of what is false to reveal a more authentic presence.  It may feel very fiery in nature, like the ancient concept of the “art of fire” from alchemy that inspired modern psychologists such as Carl Jung and James Hillman to develop alchemical psychology.

While some purists like to argue against the plausibility of constructing psychological theory inspired by the chemistry of alchemy, there are nonetheless countless aspects of alchemical psychology that are not only thought provoking but can be very pragmatic at times, no matter how “far out” the ideas may feel to some.  For those who get pushed to the edge of consciousness and beyond, theories like alchemical psychology can actually be an essential guide.  I heard a lecture by Robert Bosnak on the Jung Platform in which he described alchemy as a lyrical mode of perception in an emotional way that is far removed from logic- it feels expressive, emotional, passionate, and deeply felt, like the idea of the world being born as a sea of sparks arising from the unknowable.  Our bodies form around this essential spark and so like an alchemist we can work to connect with this spark of matter inside of us.   Embodied imagination is essential in this process, and all of our imaginations can be sparked by Mercury’s superior conjunction.

The elements of alchemy include sulfur as desire, salt as a slowing down to crystallize, the mutable nature of Mercury, and the lyrical dance of all three.  It describes a quality of heat more so than a quantity of heat, and includes four levels of quality.  Particularly resonant to me about this time is the boundary between the third quality (that is like a burning heart of courage and the isolating anger of Mars driving the work harder) and the fourth quality (that is like a clarification into realization, like endless nights of wandering into penetrating insight).  In the transition between the third and fourth qualities, we can feel like we are too hot, too angry, and yet if we keep going anyway then seemingly out of nowhere clarity and insight will arise.  This feeling could very well correlate now to this time of Mercury’s superior conjunction transitioning into the Full Moon in Aquarius two days later:

Of course, many of the aspects in the Full Moon chart above are the same as at the time of Mercury’s superior conjunction, but the difference is that the full lunation is illuminating everything in starker contrast.  It is important to remember as well that Saturn is the traditional ruler of Aquarius, and so from that perspective the square between Scorpio Saturn and Leo Mercury/Sun is emphasized.  In addition, if you prefer the modern rulership of Uranus of Aquarius, then the trine between Uranus in Aries and the Mercury/Sun conjunction in Leo is highlighted.  Either way, this is a very powerful Full Moon, and not just because it is a Super Moon so close to our Earth.  Whatever sparks of creative inspiration emerge for us now, we will want to take responsibility to integrate this insight into our daily work.

Dane Rudhyar in his Astrological Mandala described an interesting Sabian Symbol for this Full Moon at 19º Aquarius:  “a forest fire is being subdued by the use of water, chemicals and sheer muscular energy.”  Rudhyar wrote that the keynote for this symbol is about “the skill and courage necessary to bring under control the destructive potential of carelessness of karmic visitations” (p. 261).  Our world is full of immense and extraordinary conflict, destruction, and trauma at this time.  As the world servers among us want to find areas to focus on and help facilitate productive change in one way or another, many of us are also confronting our own personal demons that we want to shift into more of a connection with a universal “higher mind” that will help navigate us in a direction in line with the “good” of all beings everywhere.  The aspects of this Full Moon make solutions to both of these scenarios a real possibility.

Finally, it is worthwhile to note that there is “sympathy in the square” between Leo and Scorpio according to the ancient astrologer Rhetorius the Egyptian, because they are signs of “equal rising” that are contra-antiscia across the equinox axis of Aries and Libra.  In the days leading up to Mercury’s superior conjunction, both Mercury and the Sun in Leo became contra-antiscia to Saturn in Scorpio, meaning that Saturn could “hear” both Mercury and the Sun.  In addition, at the time of the Full Moon in Aquarius, Mars in Scorpio will be contra-antiscia to Mercury in Leo, meaning that Mars will be able to “hear” Mercury during the Full Moon.  These aspects mean that although these squares between Leo and Scorpio may seem intense, they also hold strong resonance for manifestation, and can help us work productively with whatever conflicts arise.  If you want to read more about antiscia, a good resource is the website of Seattle astrologer Kate Petty.

Life may feel like a whirl wind at the moment, so it will be best to go into the spiral.