The Taurus Full Moon brings illumination into the underlying pathways between our inner sense of purpose and our external work and presence in the world. Although the Full Moon is exalted in Taurus, there is volatility fermenting underneath its light since it is separating from an opposition with Mercury retrograde while applying to a flowing trine with Pluto in Capricorn. As a result, it will be important to monitor any deep seated shifts we notice are altering our internal landscape, so that we can begin reordering and rearranging our outer expression in accordance.  The Taurus Full Moon can be utilized for taking a break from recent conflict in order to gather one’s resources and discern the way forward based upon whatever inner changes in values have been taking shape.

The Taurus Full Moon is not only separating from an opposition with Mercury retrograde, but also from a harmonizing sextile with Neptune in Pisces and a stabilizing trine aspect with Saturn in Capricorn. As the Taurus Full Moon is further applying to a trine with Pluto, it is in an ideal position for bridging our vision of what we desire to manifest with the hard reality of our circumstances and the necessity of needing to address certain issues. The influence of Mercury retrograde upon the lunation demands turning toward tension and utilizing the friction of resistance to deepen in your resolve for taking the responsibility to complete whatever you have already set in motion.

Playing the role of an angelic kindler of inner light is the asteroid Vesta, as it is forming a conjunction with the Full Moon in Taurus. The influence of Vesta in Taurus on the lunation sharpens focus for whatever current resources and issues are truly valuable and necessary for us to engage with, versus which ones are distracting us from our greater purpose. Vesta in Taurus brings clarity of consciousness and transfigures tension into creative expression when we are fully embodied with our higher purpose and centered in devotion to our essential values and authentic presence. Pay attention to any areas of life in which you feel out of alignment, for the Taurus Full Moon and Vesta can facilitate any retuning and rebalancing that is needed. 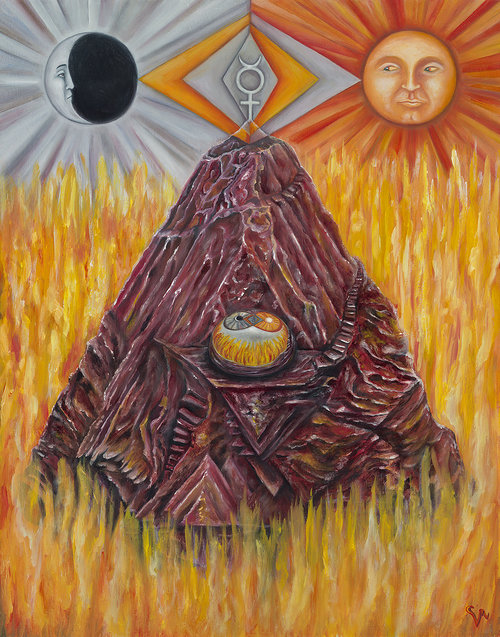 The Taurus Full Moon arises at the midpoint of Mercury retrograde in Scorpio, just a day after Mercury experiences a rebirth in the heart of the Scorpio Sun on November 11. As a result, the Moon’s full light will shine down upon whatever new thoughts, ideas, plans, and intentions have been seeded by the union of Sun and Mercury. Moreover, the Full Moon will also illuminate previously concealed aspects of self and circumstance that we can begin to address and integrate as Mercury retrograde continues its process of dissolution. Now that the most intense period of decay and decomposition with Mercury retrograde is over, we can gain clarifying insight into the matters that have come up for review and resolution since Mercury stationed retrograde at the end of October.

As the Moon wanes in light during the week following the Taurus Full Moon, Mercury will remain within its chthonic invisible phase as it begins to tunnel up from its underworld passage. Mercury retrograde in Scorpio will form a collaborative sextile aspect with Saturn in Capricorn as well as a flowing trine aspect with Neptune in Pisces on November 13, creating a potent period in the days following the Full Moon to intuit how to reorder plans and structures in our life to come into greater alignment with whatever core changes have been emerging into awareness. Up until Mercury re-emerges into visibility again on November 19, it will be more important to imaginatively explore new insights and ideas to the fullest extent possible than to try to rush into making them fully manifest

Mercury will finally return to visible light again as a Morning Star on November 19 while beginning to station direct, a week before the New Moon in Sagittarius on November 26. As Mercury undergoes a process of recovery from its retrograde motion after stationing direct on November 20, it will gain an added dose of vitality from the entrance of Mars into its watery home of Scorpio. The co-presence of Mars in Scorpio with Mercury stationing direct will catalyze forward momentum in implementing the revelatory insights received in the light of the Taurus Full Moon.

The Full Moon in Taurus is ruled by Venus in Sagittarius. In contrast to Mercury,  Venus is shining bright in twilight as an Evening Star while heralding the rise of the Moon in Taurus. Although Venus has little essential dignity in the fiery home of Jupiter, she is within her Egyptian bounds at the time of the Full Moon giving Venus greater capacity to direct her interests in pleasure and harmonious aesthetics than normal in Sagittarius. Venus is not forming a major aspect with the Full Moon, but is applying to a catalytic square aspect with Neptune in Pisces that will complete on November 14. The tension between Venus and Neptune may be felt in the disconnect between the reality of present circumstances and idealized visions of what we desire to manifest. If the Full Moon’s light unveils disillusionment regarding certain hopes or dreams, Venus will be in position to facilitate a reorientation with realistic visions of growth and a shedding of unrealistic expectations during the waning half of the lunar cycle.

After Venus completes her square with Neptune she will begin applying toward a conjunction with Jupiter in Sagittarius that will complete on November 24. As a result, during the waning half of the lunar cycle Venus will trigger the last quarter square phase between Jupiter and Neptune that has been one of the dominant astrological themes of 2019.  While the last quarter square phase between Neptune and Jupiter may have led you to release old illusions during the past year, it also has brought invitations to embrace a more expansive vision of the creative gifts you have to share with others. Venus can therefore bring encouragement in taking the risk to embody more of your potential, as in Sagittarius she enjoys the thrill of adventure when following quests into the unknown.

In addition to Venus being co-present with Jupiter in Sagittarius, Mars in Libra is applying to an exact sextile aspect with Jupiter in Sagittarius during the Full Moon in Taurus. The harmonizing sextile between Mars and Jupiter is a further boost for embarking on an expansive pursuit of vision. In previous weeks, Mars in Libra has traversed a difficult passage of moving through intensifying square aspects with the lunar nodes, Saturn, and Pluto that stirred up conflict and has made us acutely aware of the obstacles and barriers we must contend with. As Mars moves through its stabilizing sextile with Jupiter its broken sword becomes reforged and its courage revivified. Likewise we can feel our resolve for resiliently persisting through whatever difficulties we have been facing renewed.

6 of Pentacles by Pamela Colman Smith

The Full Moon peaks in the final degree of the second decan of Taurus, associated with the Six of Pentacles card illustrated above by Pamela Colman Smith.  In the image we witness a mercantile figure carrying scales of balance in his left hand, while dispensing gold coins with his right hand to figures kneeling on the ground with tattered blankets begging for money. The Six of Pentacles card is typically associated with giving and receiving on the material plane, whether that be through monetary sources or tactile, healing touch. The unifying theme is that there is receiving found in the giving, and giving found in the receiving, with the image of the scales further signifying a sense of internal balance and authenticity found in the process. Through inner harmony transmitted within collaborative exchanges with others, great success and productivity can be achieved in the material realm.

Austin Coppock in his book on the decans 36 Faces ascribed the image of “A Linga-Yoni” to the second face of Taurus, bridging images of “procreative unions” and “wanton fertilization” with the practice of virtuous action. Coppock described an alchemical process for the second face of Taurus that mirrors the second face of Scorpio where the Sun is currently residing. Notably, Coppock advised that the matters generated in this face “must be attended to carefully and consistently,” as “dedication must join fecundity and passions to complete the picture this face provides . . .Passion is necessary for continuing fructification, but those raw powers must be tempered by means of an ordered effort” (p. 75).

The Hellenistic text 36 Airs ascribed the Horai to the second decan of Taurus, a trinity of goddesses of the seasons and natural cycles of time who are the daughters of Zeus and Themis, goddess of divine law and order. Diodorus of Sicily wrote in the 1st century BC that each of the “Horai was given a responsibility named after her for the ordering and arranging of life for the greatest benefit of mankind” and “furnishing a prosperous life” through “lawfulness {eunomia}, justice {dike}, and peace {eirene}.” In keeping with the Taurean metaphor of cultivating crops, the Horai were worshipped by those planting and tending their field of harvest in alignment with the rising and setting of stars. The presence of the Horai with the Full Moon in Taurus suggests the wisdom of knowing the right time for action performed in the right way.

The Moon rules the second face of Taurus, giving the Full Moon the powerful essential dignity of being in its exaltation, triplicity, and face. While we are each bound to the constraints of our current situation, we each also have the ability to put our whole heart and soul into expressing and sharing whatever resources and gifts we are able to harvest from our circumstances. May the potency of the Full Moon’s light pour down upon whatever hopes and dreams you are nurturing and whatever purposeful vision you are enacting with your fully lived life.

If you enjoy my writing please consider supporting my work through a monthly subscription on my Patreon page. My intention with Patreon is to receive enough support to not only help me continue to offer the articles I have been doing for free, but to also expand the scope of what I am offering. Take a look to see the benefits you will receive as a patron!