The New Moon in Cancer on June 23 follows closely behind the Cancer Solstice in which our Sun stands still, as well as the rebirth of Mercury within the heart of the Sun.  The solstice in Cancer is one of the peak moments of the year, the beginning of Summer in our northern hemisphere and the beginning of Winter in our southern hemisphere.  This year as our Sun stood still at the pinnacle of its furthest northerly reach, Mercury united within its fiery rays for an extremely powerful superior conjunction of the Star of Hermes with our Light of Spirit.  The longest day in our northern hemisphere and the longest night in our southern hemisphere, the Cancer Solstice pulls us within to explore the deepest desires of our heart, while also calling us to express our feelings and visions in our wider community, finding appropriate forms and mediums through which to communicate our message.

The last time Mercury formed a superior conjunction with our Sun was in March at the beginning of the Venus retrograde in Aries.  Following Mercury’s union with the Sun during its retrograde in April, Mercury spent an extended period of time moving backward and the forward again in union with Uranus.  The first half of 2017 has brought significant shifts, some unexpected and all necessary, as we moved from a period of eclipses into extremely volatile phases of Venus and Mercury retrogrades.  The Cancer New Moon comes at the perfect time to look backward to the first half of the year and what has and has not come into manifestation, while looking forward with focus on configuring what we need to shift and restructure in order to bring more of our desires into form and expression.  The second half of 2017 will continue to bring volatility and immense change.  As a result, the Cancer New Moon is ideal for centering within and nurturing ourselves and loved ones with intimate attention.  Tenderness and gentle strength that calms and soothes volatilized nerves will be important medicine in the lunar cycle ahead. 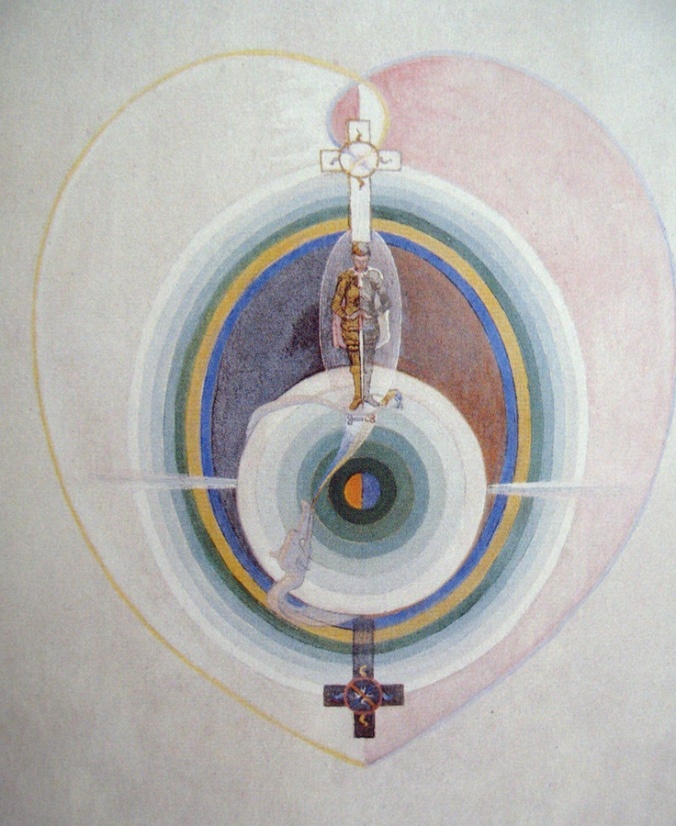 Cancer is the home of the Moon, and so the New Moon in Cancer is always an especially powerful moment for setting intention.  Cancer is a cardinal sign of initiation and leadership that simultaneously connects with the emotional realm within as well as the emotions of those we meet in relationship.  Cancer holds our memories and in the reflection of its waters we catch glimpses of our essential nature and most cherished desires.  While the season of Cancer may make us think of ruminating over past memories, the current New Moon in Cancer is most vital in terms of making new memories that will enliven our passion for life and bring sustenance to our sense of soul.  This is a New Moon with which to launch yourself into living life fully in the moment, seizing the opportunities brought by day and night to receive the pleasure of being alive.  Humanity on our planet has been going through a difficult time of immense suffering on many levels, and the amount of change and reform in need of being enacted can feel overwhelming to achieve on an individual level.  The Cancer New Moon will support expressing yourself into your wider community and in so doing discovering collaborators who possess a sense of mutual purpose.

Mercury separating from the Sun while applying toward a conjunction with Mars is an important aspect of the New Moon, for in the lunar cycle ahead Mercury will unite with Mars in opposition to Pluto while both are invisible under the beams of the Sun, and then as Mercury emerges as an Evening Star around July 4 it will form a catalyzing square with Uranus in Aries.  Allow Mercury to soothe and open up whatever defense mechanisms have been internally preventing you from risking your heart in action.  As Mercury gets closer and closer to Mars, look for remediation outlets to express passions through so that they are less likely to become bottled up and unleashed in anger.  Its likely that many aspects of collective current events will incite anger and inspire action, and so this is also an excellent New Moon to look around your community for volunteer, service, or organizing opportunities.  Mercury combined with Mars can be volatile, yet in the end Mercury loves to connect and bridge and so by taking action there can be significant new connections made linked with purpose.

Mars is playing a leading role in the New Moon as it is applying closely to a square with Jupiter in Libra.   Mars is currently invisible under the beams of the Sun, undergoing a period of purification and regeneration that will not complete until the Sun unites with Mars in Leo on July 26.  As a result the Mars square with Jupiter is potent and will dredge up deep issues of ambition and desire, some of which is in need of shedding while other aspects can be returned to our inner soil to reseed future visions.  Mars in Cancer is known as being in its “fall” since it is the opposite sign of its exaltation in Capricorn, and yet there is an interesting aspect in which Jupiter is receiving Mars through the square since Mars being in Cancer means it is in the exaltation of Jupiter.  An empowering interpretation can be found through realizing the wisdom we can gain when pursuing passionate desires even when we do not achieve our intended success.  The importance is in taking action and risking our emotional involvement and full presence.  It will be important to not become overly critical of ourselves for not having already achieved certain grand ambitions, but rather acknowledge and find value in whatever point of our journey we find ourselves within.

Mars in Cancer can bring about emotional outbursts and so it will be vital to find appropriate outlets for our feelings and focus on the relationships that can offer us nurturance and support.  The period from June 28 through July 4 is important to be aware of, as Mercury will unite with Mars and then oppose Pluto as Mars also forms an opposition with Pluto, followed by Mercury forming a challenging square with Uranus in Aries.  Further interesting is that just before Mars and Mercury enter into these intense aspects, they will have recently formed a supportive trine with Neptune in Pisces.  It will help to find work and projects you can pour your heart and energy into without become overly upset if the results do not match your idealized expectations.  There is tremendous power and inspiration found within these aspects, and we will gain strength through courageously engaging life fully rather than withdrawing through fear or defense mechanisms.

Another significant intersection between personal planets with the transpersonal at the Cancer New Moon is Venus in Taurus applying closely to a trine with Pluto in Capricorn.  At the previous New Moon in Gemini, Venus was in a square with Pluto that brought up some deep issues we can now integrate and find deeper stability around.  The trine from Venus to Pluto can also help us deepen intimacy with both ourselves and others through opening ourselves to the sort of full emotional involvement that facilitates buried issues reemerging into the light of conscious awareness.   Venus in Taurus can help stabilize and harmonize whatever has become out of balance, so look for ways to embrace Venus in your life in whatever forms bring you pleasure and comfort.  While opening ourselves to deep emotions may not always feel pleasurable, significations of Venus such as music, color, food, and intimacy can be a balm that helps us cross over the threshold of old inner obstacles. 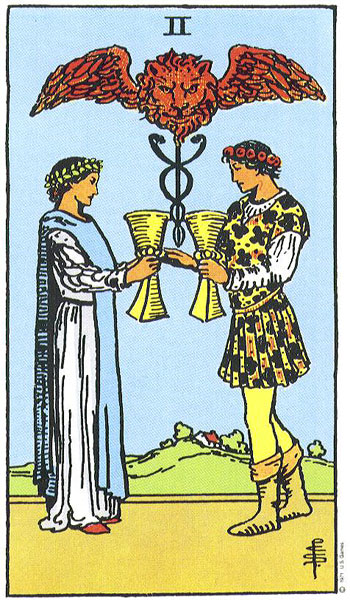 2 of Cups by Pamela Colman Smith

The New Moon falls in the first face of Cancer associated with the Two of Cups card illustrated above by Pamela Colman Smith.  In the image we find two lovers coming together with shared passion on an equal level, with a caduceus of intertwining snakes and a winged lion arising in the space between their merging desire.   Fittingly for the erotic reciprocity found in the symbolism of this image, the first face of Cancer is ruled by Venus.  Yet Venus is not only about the romanticism of Eros and Psyche.  We can also find a connection between Venus with the first face of Cancer and the Two of Cups through the inner values that underlie all of our relationship dynamics with others, a source that can alchemize magical healing and power within the relationships that resonate with our essence.  The New Moon in Cancer is ideal for honoring the relationships that receive, support, and protect our unique expression and presence.

Austin Coppock in his book on the decans 36 Faces ascribed the image of “A Mother and Child” to the first face of Cancer, as he wrote that the face holds the hungers of our emotions and biology, the womb that gives birth to us and all of our resulting needs.  Coppock further connected the themes of mother and child to the pursuit of romantic love found in the Two of Cups since “it is the perfect support, half-remembered from the womb, that gives rise to the human dream of similarly nursing bonds between committed partners” (p. 104).  Coppock wrote that idealized unions can be realized in the first decan of Cancer, the type of relationships that seem “as if the two reside in each other’s wombs, simultaneously devouring and being devoured, yet neither is depleted” (p. 105).

As the lovers in the image of the Two of Cups are greeting one another with chalices, consider at the Cancer New Moon what sort of chalice you are carrying into your relationships.  Who are you willing to share your chalice with and why, for what reasons.    The relationships in which equity and reciprocity coexist naturally will emerge with magnetic force in the lunar cycle ahead and will feel most deserving to share in mutual nurturance.  Remember to also pour an offering to the Earth and Spirit, and set intention to manifest your most cherished desires in the season ahead.