The Full Moon in Aries arrives with a jolt within deeply shifting, turbulent astrological atmosphere.  The Moon full of light in Aries calls us to show up with courage to areas of life and relationship needing our undivided attention.  Aries stokes the flames of our personal sovereignty and drive to passionately go after what we want, and since the Full Moon is applying to a square with Pluto the associated feelings can erupt with immense force from our depths.  Pluto in Capricorn stationed direct last week, and the lord of the Kuiper belt underworld is barely beginning to move forward as the Full Moon peaks.  When Pluto stations in stillness it becomes necessary to address whatever feelings or needs that emerge into our awareness from subconscious burial grounds.

Pluto has its reputation for initiating us into underworld journeys for a reason, as its transit pulls us into the deepest parts of our soul, making us aware of desires we may have been resisting or denying.  Pluto in Capricorn also serves as a collective symbol of the gross inequities and oppression saturating hierarchical power structures around our planet, as well as the devastating impact numerous recent natural disasters have had on humanity that desperately are in need of systematic aid in recovery.   The Full Moon in Aries incites personal feelings to both liberate ourselves from past repression and persecution as well as to take direct action to assist others around us struggling with systematic obstacles.

In addition, last week saw the third and final exact opposition form between Jupiter in Libra and Uranus in Aries.  While this full phase between Jupiter and Uranus has multitudes of historical examples in which dynamic new horizons in art, science, philosophy and more open up, forever transforming collective worldviews, the opposition between Jupiter and Uranus also has a disruptive, dismantling impact that can feel unsettling.  Immense change amid destruction of the old occurs when Jupiter and Uranus face off, and the revolutionary fervor they inspire can be directed toward protest action in support of human and natural rights as well as by others to expand the power of certain groups over others.  When waves of change can be felt within the collective, people used to old ways that now feel threatened often react with extreme willfulness in trying to hold tight to the way things have been done before. Violent clashes and warfare often erupt alongside the creative emancipation that Jupiter and Uranus also foster.  Those in power or seeking power engage in the shadow side of Jupiter and Uranus that involves attempts to claim greater power for themselves without considering the full ramification on others.

Jupiter in Libra is now pulling away from its harmonious sextile with Saturn in Sagittarius, but Saturn does continue to form stabilizing aspects with both Jupiter and Uranus.  Saturn in Sagittarius can help temper the tumult of Jupiter and Uranus on personal levels by living and expressing oneself in accordance with inner values and integrity, being mindful of how our behavior impacts others.  While a lot of devastating and tragic events have been happening in current events, on personal levels for those fortunate to be able to work on projects of passion, the interplay between Jupiter, Saturn, and Uranus has brought the ability to experience breakthroughs into higher stages of development of whatever we have been working on.

The Full Moon in Aries brings the opportunity to reflect upon the transit of Jupiter in Libra we have experienced in the past year.  Jupiter in Libra is still visible at the time of the Full Moon, but soon thereafter will disappear under the beams of the Sun and become invisible to us in the sky while it undergoes regeneration.  Within the waning cycle of this lunation phase, Jupiter will ingress into Scorpio where it will eventually unite with the Sun on its way to becoming visible again in morning skies in mid November.  Think back across this past year and all of the changes brought about in correspondence with Jupiter moving through the sign of the Scales since it first moved into Libra on September 9, 2016.  Jupiter is about the wisdom we gain from our experience in life with all of its associated difficulties and inspiration.  Taking time to sift through associated experiences with Jupiter in Libra will help coalesce meaning that will be vital to integrate as we enter into a year ahead of Jupiter in Scorpio.

For those who look ahead to aspects surrounding future astrological transits, the Full Moon in Aries has been circled far in advance due to Venus and Mars uniting in the sign of Virgo at the same time.  Amazingly, Venus and Mars will begin a new cycle in Virgo at the same time the opposition between the Sun and Moon is peaking.  The Sun is in Libra, the home of Venus, with the Moon forming a polarity in the sign of Aries, the home of Mars.   Venus and Mars became tantalizingly close to one another back in January through March of 2017 before Venus stationed retrograde and moved away from Mars.  Many plans were altered and changed during the Venus retrograde period and thereafter, while other plans continued to develop amid changes and now are coming together in greater strength.  The cycle between Venus and Mars is one of the most important to pay attention to in astrology, and when they come together we are ready to give birth to new forms in our life.

Venus and Mars uniting in Virgo, the home and exaltation of Mercury, brings the opportunity to become fully present in the moment and discern underlying issues occurring in our relationships.  Venus and Mars both enjoy being in Earth signs, and Virgo is an especially sensual and erotic sign for their union which can be enjoyed within romantic relations.  Virgo is also an in-between sign of transitions and spreading messages, and so we can notice what changes can be felt within our relationships and how we can bring about reparation and reconciliation wherever needed.  Virgo also brings resources for Venus and Mars to use in service to others in need, as well as in service to improving how we relate to others.  We can gain critical insight into our past relationships with others and make adjustments from a healthy place of inner healing rather than from harshly negative self judgment that can become projected at others.

Fascinatingly, the next time Venus and Mars unite will also be in Virgo in August 2019 though they will be neither Morning Stars nor Evening Stars at that time but rather in their invisible, liminal transition.    Just as we can look back and learn from the passage of Jupiter through Libra in this past year, so can we look back two years to the beginning of the past Venus and Mars cycle to learn from our experiences.  Venus and Mars in Virgo are in a perfect place to analyze our experience and integrate the needed lessons while letting go of what no longer serves us.

At the time of the Full Moon, Mercury is combust under the beams of the Sun and approaching its superior conjunction with the Sun which will occur on Sunday 8 October 2017.  At its superior conjunction Mercury is on the other side of the Sun from our Earth in its orbit, moving at a quicker pace through the zodiac than it does when uniting with the Sun while moving retrograde in between our orbit with the Sun.  When Mercury enters the heart of the Sun on October 8 all of Mercury’s significations will be strengthened and empowered.  However, at the time of the Full Moon Mercury is at the very end of its cycle and undergoing a purification process that is ultimately bringing regenerative strength but while in the process all of Mercury’s connections may not be firing as quickly and sharply as normal.

Mercury being close to the Sun in Libra is further interesting since Mars and Venus are uniting at the same time in the home and exaltation of Mercury.  Mercury enjoys being in air signs and can help us focus on communication within our relationships to find greater balance on all levels.  Within the tumultuous astrological atmosphere, we will be working on balance with others as well as within ourselves between our conscious awareness and unconscious.  After being reborn in the fiery solar rays, Mercury will head into a direct square with Pluto followed by a sextile with Saturn and then an opposition with Uranus in Aries between October 9 and October 15.  At the end of the current lunar cycle in the dark of the Moon in Libra on October 18, Mercury will unite with Jupiter at the very beginning of Scorpio.

One of the best gifts Mercury in Libra can give us is in simply listening.  We can more deeply listen to our own inner needs, as well as more deeply listen to the needs being expressed by others in our relationships without distorting their words and underlying connective feeling with our own agenda and judgment.  Mercury in Libra also brings the gift of being able to trouble shoot impasses and conflicts with the ability to say the right thing at the right time to bring about mediation or improved harmony. 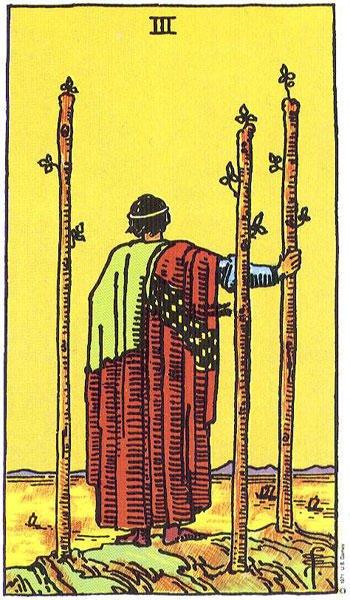 3 of Wands by Pamela Colman Smith

The Full Moon in Aries falls in the second face of Aries associated with the Three of Wands card illustrated above by Pamela Colman Smith.  As the second decan of Aries holds the degrees of the exaltation of the Sun, we fittingly find a very solar image in this card of a proud figuring overlooking a numinous landscape from a mountainous peak.  There are ships heading off into the vast expanse beyond into other worlds for communication and commerce.  Agrippa’s Three Books of Occult Philosophy ascribed an image made for nobility, loftiness of kingdom, and a great dominion to the second decan of Aries, and ancient texts are filled with the attribution of images linked to wealth and rulership to this face.

Austin Coppock in his book on the decans 36 Faces ascribed the image of “The Crown” to the second decan of Aries.  Coppock described the focus of this face as being “the world which emanates from an individual” and “the qualities which they choose to embody” (p. 59).  Coppock wrote that the ability to create one’s own world found in this face leads to not only the attraction and magnetism of others of like-mind, but also to “the key to creating pocket realities which do not obey the laws of the collective reality field in which they exist” (p. 60).  Persephone is an interesting noble figure from myth who can give birth to worlds who is attributed to this face by ancient text, as the Queen of the underworld appears in the fragmentary Hellenistic text the 36 Airs.

The current astrological atmosphere of Jupiter and Uranus peaking in opposition with Pluto stationing direct has been intensifying inner dynamics at the same time external, global events around our planet continue to cause indescribable suffering and destruction. We are at a collective crossroads, and when facing the darkness of the unknown at such soulful intersections, we can turn to inner guidance and the intermediary forces that help us remember the threads and path of our destiny.  We remember the gifts we hold within and realize the good we can help bring about by developing them to share with others in our wider community.  The Full Moon in Aries is ideal for discerning what we have to share as well as for how to more effectively find outlets of expression to those who can benefit from what we have to share.

One thought on “Full Moon in Aries”